This page will be dedicated to responding to requests from concerned citizens. Please screenshot any social media questions/conversations and we will address them.

1. If this initiative passes how much money would be reduced from the general fund expenditures?

Zero, this initiative only forces investment in infrastructure before it can be spent on discretionary items.

2. I was told if this initiative passes that there will be massive cuts to the general fund and it would cripple the City.

We’ve included some math below from last year’s budget. This amendment would force about $44 million into reinvestment and away from the general fund. To put things in perspective the entire general fund is $445 million. So it would roughly be a 10% budget cut. However, it is important to note that the budget from just two years ago was $400 million. Given that, this amendment wouldn’t take place for two years after the 2020 election. The budget would not be impacted. Rather it would prevent it from growing at an uncontrollable rate.

3. I was told this was the system we had since 1945 and we should not monkey with it?

This is true Mesa has used utility transfer to pay for the general fund since 1945. However, in 2000 the city implemented “home rule”. This allows the city to get away from the state-mandated budget limits using a formula based on a combination of population and inflation. Since this cap has been removed Mesa’s spending increased substantially and the deficit is largely made up of transfers from the enterprise fund.

4. Shouldn’t we enact a primary property tax instead?

Calculating for the lack of a primary property tax Mesa’s estimated annual cost is still the second most expensive in the valley. The entire report is available here.  We do not support more taxation. 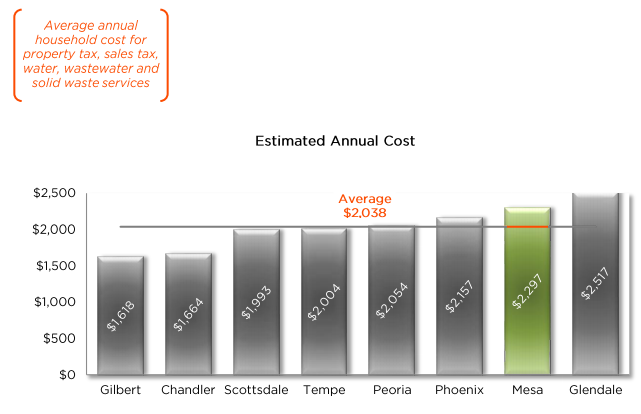 5. I have heard from multiple citizens we need to start taxing food. Why don’t we do this?

Our answer is the same as the primary property tax the city has the ability to ask the voters for money for large projects. This is the secondary property tax. It is how we built things like Cub’s stadium. The main problem is the growth in spending not the source of taxation. However, some groups want to keep increasing the budget every year. We agree that they should work on a primary property tax or food tax if their goal is growing the government.

6. I was told Mesa already has caps on how much can be transferred out of the utilities to the general fund and it was based on the consumer price index?

This is not entirely true. The city has set up other non-utility related funds like the “Economic Investment Fund”. The transfers from the enterprise fund to this fund are not limited or monitored in any way. An excerpt from the bond rating agency can be found here.

7.I heard the bond rating agencies rated Mesa AA-/Stable and Aa2 stable. Doesn’t this mean we have nothing to worry about?

No. The bond rating agencies recognize that the City of Mesa is a monopoly. Just like any monopoly the Mesa City Council can raise utility rates at will. They recognize that there is little chance of default on the bonds when rates can be raised indefinitely on the citizens of Mesa.

8. I heard the economic investment fund is funded by selling unused assets and putting those dollars to work?

This is highly inaccurate. Here is the schedule which shows where the money comes from.

9. I’ve heard this initiative would cause massive cuts to public safety. Is this true?

Remember this initiative does not cut a single dollar from the overall budget. It only requires the necessary investments into the utilities like water, wastewater, sewer, trash, and electric before it is spent on anything unrelated to utilities. Further, the Mesa City Council on an annual basis decides how to allocate the budget. If they choose to cut public safety there is nothing that can be done.

10. Some politicians have said this initiative “burn the place” down. Will it?

This is definitely stretching the truth. What we’re more concerned about is the growth of the City of Mesa’s general fund budget. In the last 4 years it has grown at a compounded average rate of 5%. If the City of Mesa government keeps growing at this rate then utilities will have to keep going up to keep pace.

11. Where did this initiative originate from?

There were many supporters looking to put this initiative together. It was filed by Mesa Councilman Jeremy Whittaker.